SJF: From Alternative Geography (2006) on you seem to have shifted the subject of your work to an exploration of what it is to be a poet of exile, or at least displacement, and you have done it without a call to nostalgia, which is a remarkable achievement. Do you think this is a permanent state for a poet, or does your sense of displacement lessen as time passes, as it is for you in Edmonton?

IM: I would use the word displacement instead of exile, as I was never forced to leave Egypt. During the first few years in Boston and then in Edmonton, Canada, I went through what I think many people feel in displacement: nostalgia, homesickness, anger, comparing the two places. I even had some surreal dreams that combined places, people, languages. Writing poetry was not even a temptation during this period. I did not write a single poem for five years. Looking back, I think the reason I didn’t write was that these direct emotional responses are not attractive to me as spaces to write from. Even before leaving Egypt, it was remarked about my poetry that it avoided traps of sentimentality. I read lots of works written from displaced positions (this was not difficult, as North American bookstores are full of them), but I could not connect with most of them. These authors would assume the role of mediator between two cultures, or present and past, or here and there. This type of thing might be useful in post-colonial studies courses, but I felt my experience was elsewhere. It wasn’t until I went to live in Egypt for a year in 2003 that things began to open up. I simply realized that it was impossible to go home. I began writing Alternative Geography immediately upon my return to Canada.
When I left Egypt for the first time, a great aunt who had never left my home province sent me off with an Egyptian expression: “May it be a happy threshold”. What is critical here for me is not that the threshold be happy or sad, but simply that it be a threshold. This is the position from which I can write. It is as if, before spending that year in Egypt, I had something I could refer to, something that I could play my current experience against. Upon returning to Egypt, that reference was lost, and I was stuck on the line between two places.
The question of position is crucial to writing. If we imagine five poets writing about a rose or a corpse, what will differentiate them will be the positions from which they write. This is what some would call voice. It takes time to find one's position, and I feel it is the primary challenge of writing. Once the position is found, the writing will open up, albeit with its own set of challenges. In the case of Alternative Geography, there was an anxiety surrounding the question of how to write from that threshold position in Arabic.
Now I can recognize this journey, but at the time, I experienced it as a general sense of frustration.

SJF: Many of the poets attending Poetry Parnassus are poets of exile. Sadly, often the nature of poetry is as a voice of protestation, of political expression in climates where what needs to be said finds voice in poetry. Do you think this affords a bond between poets, because poetry is somehow unique in its aptitude for voicing protest and exile?

IM: Reading the list of poets invited to Poetry Parnassus, there are many who were forced to leave their countries, but there also many who chose to do so, while on the other hand, many might experience alienation, displacement and political struggle without leaving home. It is for these reasons that I will once again avoid using the word “exile” as it is an ambiguous term that is easily abused. To me, the “exile” of Anna Akhmatova in Requiem is no less than that of Czeslaw Milosz in Native Realm.
As for poetry as a voice of protest, this is something I have not been able to relate to throughout my career. Perhaps it is a response to the culture I came from. The big political questions that emerged from the end of the colonial era, the ideological debates that followed it, and of course the Palestinian tragedy, occupied significant space in the Arab literary scene. They did produce great poets such as Mahmoud Darwish, but even there, I believe the poetic in his work is independent of the element of protest. Genuine art can be an indirect political force in its pedagogical role, as described by Alain Badiou: “Art is pedagogical because it produces truths and because education (save in its oppressive or perverted expressions) has never meant anything but this: to arrange the forms of knowledge in such a way that some truth may come to pierce a hole in them.”

SJF: You have travelled the world reading your poetry and attending poetry festivals. Have you experienced a sure sense of a community of poets, especially those who have left their country of origin through poetry? Do you think this will continue during POETRY Parnassus, if so?

IM: The act of traveling alone, away from regular work and responsibilities, and into another place, is an individual act. One can move lightly and meet other individuals in the same state. However, a community of poets will be the most dysfunctional community one can imagine.
Some of my very important friendships have developed at poetry festivals. It is fantastic to hear poets reading their own work in their own languages. Sometimes it introduces you to new voices or even entire literary scenes. One festival that stands out for me is the 2007 International Festival of Poetry in Slovenia, where I discovered the richness of Eastern Europe’s new generation of poets. 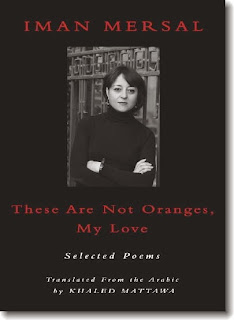 SJF: Earlier in your writing life, you were noted for your use of the prose poem, and new forms of methodology in what was an essentially traditional poetry scene in Egypt. Was this use of the prose poem a necessary move to express what you felt needed to be expressed? Were you also aiming to escape the grand rhetoric and historical ideology of Arabic poetry?

IM: Although I was part of the generation that saw prose poems move from the margins to the center of the Arab literary scene, it existed there long before us. The term “prose poem” and debates surrounding it existed in Beirut’s rich literary scene of the 1960s, led by Yusuf Al Khal (1917-1987), Adonis (1930 - ) and Ounsi el-Hajj (1937- ). Personally, I was more influenced by the Iraqi prose poets who emerged later, such as Sargon Boulos (1944-2007) and Salah Fa’iq (1945-). These poets were not recognized by any Arab state poetry festivals or publishing houses. We used to photocopy their poems and translations. I was familiar with prose poems before reading them, but it was through them that I first felt that this absence of sentimentality or ideology, this transparency of language, could exist in Arabic. Prose poems for me and others of my generation, from Morocco to Iraq, was not a choice of style. I don’t believe that writers choose style. Rather, style comes to them according to their search for a way to write themselves.
In that historical moment of the early 1990s, in the desolate urban landscape of Cairo, the group of hopeless young poets I belonged to witnessed the Iraqi invasion of Kuwait, the allying of Arab states with America in destroying Iraq, the continuing Palestinian struggle for freedom, the injustice and poverty, the hypocrisy that characterizes societies torn between global capitalism and the customs and traditions forming the core of identity; we experienced doubts about Arab nationalism, about Western democracy and enlightenment as well. This alienation experienced by some young Arab writers, filmmakers and other intellectuals of my generation created a desire to escape the grand rhetoric and historical ideology of Arabic culture in general and poetry in particular. Prose poems, in that context, were one way to oppose the mainstream grand narratives and create our own.

SJF: It seems this was also a way to allow a compression of the subject of your work, to make it more deft and simple, enabling you to refer more clearly to the mundane experiences of life. Is this true?

IM: I think so. Even though we do not chose style, form or aim consciously to adopt a certain school of writing, these things can play an important role in challenging what we are familiar with in terms of writing. For instance, after a few failed attempts as a young poet to capture the complex relationship between my father and myself, slipping one time toward the patriarch in him and leaning another time toward the sacrifice and love in him, when I refused both references and tried again it was like gambling with my being, language, knowledge and darkness. But it is fun too, to try to capture what you feel without reference; you oppose the seriousness of your topic as illustrated by others; you play and enjoy not just creating something, but deconstructing things and the rhetoric that surrounds them.

SJF: What are your feelings about the current political situation in Egypt? Is it a time for optimism, as many have hoped for?

IM: This is a difficult question. Since the beginning of the Egyptian uprising in January 2011, I think so many Egyptians move by day or even hour between optimism and pessimism and even sometimes cynicism. However, behind the rapid development that made the first Egyptian presidential election take place under the army’s control, behind the despair of seeing the old regime still in place, the criminals that destroyed the economic and political life of the country free, there is much hope. This revolution changed something deep in me; words such as “homeland,” “belonging,” and “citizenship” that seemed to exist only in Hosni Mubarak’s speeches, and in the poems and songs of mediocre poets and singers, broadcast during national celebrations on state TV, became clean now, washed from the rust of the dictatorship.
I believe that the revolution is not an act but a process. It will take time, energy and even more innocent lives, but people will win a freedom in the end.
http://ticketing.southbankcentre.co.uk/poetry-parnassus/poets/mersal-iman

About the interviewer:
SJ Fowler (1983) is the author of four poetry collections. He has had poetry commissioned by the Tate Britain and the London Sinfonietta, and has featured in over 100 poetry publications. He is poetry editor of 3am magazine, Lyrikline and the Maintenant interview series.